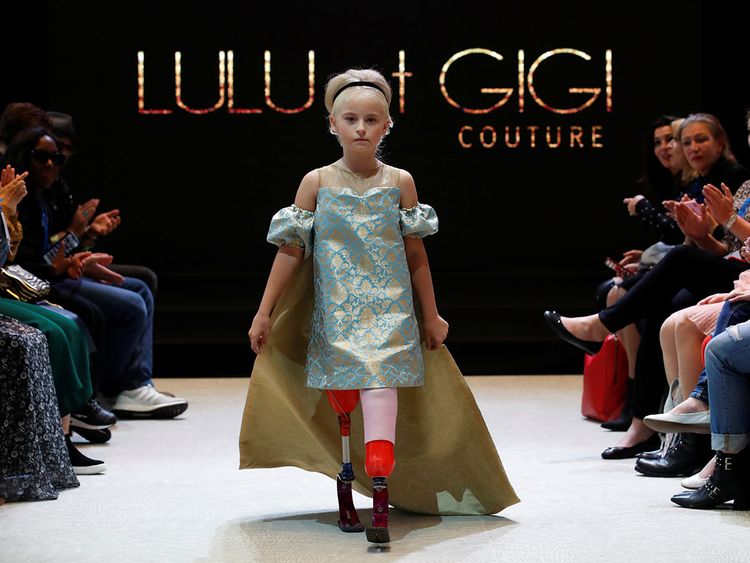 Daisy-May Demetre is a British girl who lost both her legs when she was just 18 months old, but her passion for fashion modeling didn’t stop her as she just made her first Paris catwalk on the Eiffel Tower.

The nine-year-old model from Birmingham walked for a luxury French children’s brand in the show high on the Paris landmark Friday and told AFP the experience “makes me feel pretty and special”.

Daisy-May was born with fibular hemimelia. Fibular hemimelia is a birth defect where part or all of the fibular bone is missing, as well as associated limb length discrepancy, foot deformities, and knee deformities.

She had to have the double amputation while still a baby and later received prosthetic legs on which she learned to walk.

The Paris show was her third appearance as a model for the label Lulu et Gigi, after New York and London fashion weeks.

Her father Alex Demetre said the disabled community were behind his daughter.

And he said he was not surprised at all the attention.

“I’m not surprised because I know what Daisy is like, she’s an exceptional young girl proving that disability doesn’t hold you back and she’s a great role model for anybody trying to pursue their dreams.

“Any goal she has in her head I think she can achieve, anything she chooses to do. That’s a great feeling as a parent,” Demetre added.

“Obviously coming back from a situation when she was born, when you see no future, where you see no hope… (now) anything is possible, that’s an amazing thing,” he told AFP after the show.