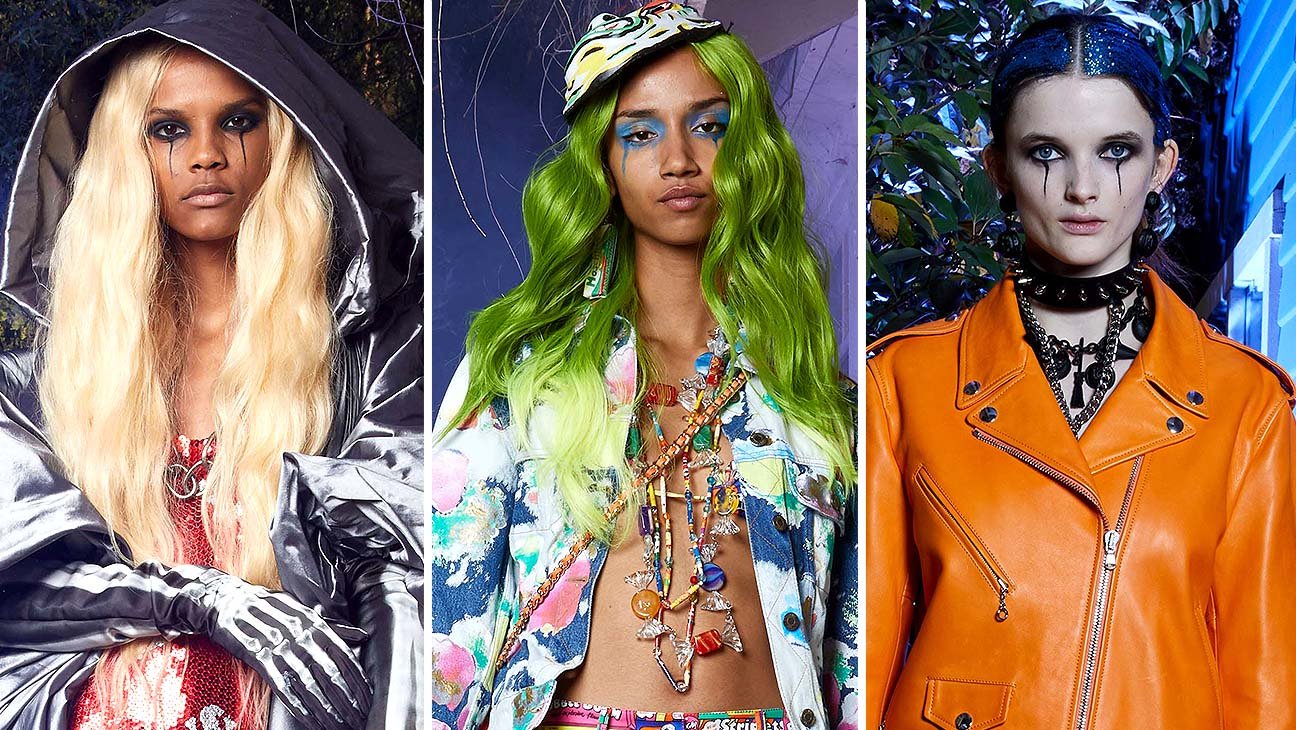 It was Halloween in June at Moschino’s 2020 resort womenswear and spring menswear runway show on Friday.  The makeup artist, hair stylist and nail artist break down the beauty look behind the scenes at Jeremy Scott’s 2020 women’s resort and men’s spring Moschino show at Universal Studios.

Los Angeles-based designer Jeremy Scott took over the Universal Studios backlot to revive the classic Universal monsters in a Halloween-themed show complete with Bridezilla, Dracula and a prom queen, plus plenty of ghosts and jack-o’-lanterns.

At dusk, trick-or-treating models strutted through a foggy Colonial Street — better known as Wisteria Lane of Desperate Housewives fame — wearing colorful wigs and hair extensions, plenty of black eyeliner and shadow that often dripped down the face, and “bloody” gashes made of red crystals on their necks. Kate Beckinsale, Paris Jackson, Storm Reid, Kathryn Newton, Madelaine Petsch, Rowan Blanchard and more stars looked on from a back-to-back row of chairs set up in the middle of the street.

Makeup artist Kabuki (who works with Russian Doll co-creator Natasha Lyonne) interpreted individual looks for each of the 70 models. “We went one by one through each one,” he told The Hollywood Reporter backstage ahead of the show. He and Scott originally tested 11 different looks but nixed some (like a skeleton face or a flame) and came up with new ideas (stitches drawn using a MAC eye pencil).

“We wanted it to be like a fashion show, but also reference just how Halloween is really a mix of people in badass makeup and little kids with little cat makeup on. So we didn’t want it to feel so uniform that it didn’t get that energy that you get from Halloween,” Kabuki added, while painting a black Batman mask over a male model’s eyes using a homemade paper stencil. “This one I didn’t test. I’m making it up right now. … It’s almost like Project Runway.” (Indeed, a camera crew filmed model Suki Waterhouse getting prepped in a blonde bobbed wig nearby, as a Lady Gaga playlist blared “Born This Way,” “Applause” and “Paparazzi.”)

“This was a last-minute thing last night,” Kabuki said as he dabbed on a mixture of teal glitter and hair gel over the bat design. “[Scott] just got inspired and he left it to me to create it, but he gave me a direction. …There’s not time to second guess.”

Kabuki described the process as creating characters, like in a movie, where some looks are “very tight and very fierce” and others are “fully naive” like children’s makeup (see: the model with a black circle nose and three lines as whiskers).

“It’s like a celebration of individuality, really. And it’s dark, but it’s humorous. It’s almost like how fantasy enters suburban life. You kind of draw from personal experience and memories of Halloween as a child,” Kabuki said. “It’s like a camp approach to Halloween or horror. Tongue in cheek.”

Prior to the show, he had beaded red crystals together by hand and applied adhesive on the back, so backstage he applied it to one model’s neck as a faux gash, dripping blood, to go with her skeleton earrings and black sleeveless Moschino dress imprinted with the words “starlet” and “icon.”

Hairstylist Jimmy Paul, armed with Drybar products, gave a male model a “pumpkin head” by coloring his buzzed hair orange and using a stencil to create a smiling jack-o’-lantern face on the back. For others, he added Major Moonshine hair glitter gel (in turquoise or gold), went minimal with “sloppy buns” or styled hair with two high ponytails for a “kiddy” look — set with Drybar’s Money Maker hairspray.

For one of his favorite hairdos, Paul turned a girl into a broken old doll with blonde ringlets and bows made of cut-up black garbage bags, “just to give it that do-it-yourself [look]. I was really inspired by Nina Hagen, a singer from the ’80s, for that. Just cheap crap in a way, you know what I mean? Just making it look like they did it [themselves], an element of kids without a lot of money. We tried to get that in there, too.”

Paul says he talked a lot with Scott about horror and Halloween, which led him to choose bright green, purple, black, red and orange wigs, often crimped: “It just reminded me of ’90s club kids and Halloween. It’s sort of Siouxsie and the Banshees,” he told THR. “There’s nothing I don’t love. It’s absolute joy and escapism, and it’s charming and it’s humorous.”

Meanwhile, Swarovski crystal certified nail artist Yoko gave each model a sparkly manicure using craft glitter in shades ranging from neon green to gold to pink to black. “To work with Moschino, that’s my favorite brand,” said Yoko, who converses with Scott in Japanese at times. “I’m from Japan and we mix a cute style into edgy street.”

She drew on Scott’s professed theme of “spooky couture” to use a lot of glitter and a rainbow of colors. “It’s a contrast; he doesn’t make it super scary, but makes it cute and funny at the same time. … It’s not goth.” Despite the monster-themed fashion, the nails weren’t meant to be claw-like or creepy — that aesthetic was saved for the werewolf, zombie or skeleton gloves donned by some models.