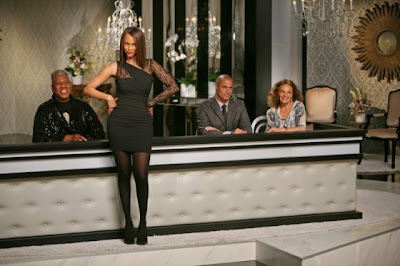 Tyra Banks is shaking things up on America’s Next Top Model. USA Today noted that the former supermodel has let go longtime co-stars fashion photographer Nigel Barker, 39; runway coach J. Alexander, 53; and creative director Jay Manuel, 39. Barker apparently bore no ill will toward Banks. US Magazine noted J. Alexander’s reaction: “After 18 cycles, I found myself in the bottom three and Tyra pulled a surprise triple elimination. I didn’t even get to runway for my life!”
Academy Award nominee Jake Gyllenhaal (Brokeback Mountain) will make his U.S. stage debut late this summer in Nick Payne’s comic drama If There Is I Haven’t Found It Yet, according to Playbill.com . The production will run at at Roundabout Theatre Company’s off-Broadway Laura Pels Theatre. Gyllenhaal made his stage debut in Kenneth Lonergan’s revival of This is Our Youth, on London’s West End.

In an interview in the May issue of Instinct magazine, out singer Adam Lambert talks about, among other things, the fact that most of his fans are not gay. “As a community we’re a little bit resistant to a gay male pop star ourselves,” Lambert says. “We’re very eager to celebrate a strong female. But to celebrate a fellow gay man—it gets catty sometimes.” He also discusses moving past moving his American Idol-related expectations and having the media scrutinize his relationship.

Britney Spears wore a $20,000 sports bra from BodyRock Sport while filming a video for the kid’s game Twister Game, according to the New York Daily News. The company’s silk Eternal Love Bra has an 18K gold zipper and is covered in Swarovski crystals and gold. It also comes with an 18K gold removable tassel with diamond-eyed skulls.

Dick Clark, the television host who introduced millions of people to music via the TV series American Bandstand, died April 18 at age 82, according to USA Today. Clark also hosted his New Year’s Rockin’ Eve annually—even after suffering a stroke in 2004. Many celebrities—including Ryan Seacrest (Clark’s Rockin’ Eve co-host since 2005), Mario Lopez, Joan Rivers, Neil Patrick Harris and Lance Bass—tweeted their condolences. Clark was cremated, and his ashes will be scattered across the Pacific Ocean.

Nicollette Sheridan has won a retrial date for her Desperate Housewives wrongful-termination lawsuit, according to the New York Daily News. Judge Elizabeth Allen White rejected ABC and Disney’s motion to dismiss and set the follow-up jury trial for Sept. 12. Sheridan, 48, claims she was let go from the show shortly after complaining that show creator Marc Cherry hit her in the head in 2008.

Hip-hop musician Nicki Minaj is coming out with her own fragrance this fall, according to the New York Daily News. Minaj is teaming with Give Back Brands, the company behind Justin Bieber’s record-breaking scent, Someday. Minaj said, “I designed this scent and bottle with my Barbz [fans] in mind; I know they will love it!” Madonna recently launched a scent, Truth or Dare, and Lady Gaga is set to release her own soon.

Social-change organization The Liberty Hill Foundation announced that out television director and creator Paris Barclay will receive its Upton Sinclair Award, which recognizes an individual who has combined talents and beliefs to advance equality and justice. Barclay will be honored May 9 at the Liberty Hill Fund’s annual Upton Sinclair Awards Dinner in Los Angeles. On television, Barclay has directed episodes of shows such as Monk, CSI, ER, Glee, Sons of Anarchy, Smash and The Good Wife.

Pop singer Jessie J has denied the claims of an unofficial biography that she is a lesbian and that bisexuality was a more appealing public identity to take on, Pink News reported. The book Jessie J: Who’s Laughing Now states that the musician has identified as lesbian in private circles since she was 17 but that music executives urged her to adopt a bisexual persona. Jessie tweeted, “”BUT what’s that?! *whispers because its a secret* I’m really a lesbian?! … Ha! Thanks for writing yet another boring untrue story.”

The Billboard Music Award nominations have been announced—and British singer Adele is up for 18 honors, according to the Daily Mail. Among the “Someone Like You” singer’s nods are Top Female Artist, Top Billboard 200 Artist and Top Artist. LMFAO received 17 nods and Rihanna (nominated in 18 last year) has 13 nominations this year.

In an interview with The Daily Mail, out musician Rufus Wainwright talked about his 1-year-old daughter, Viva, whom he conceived with childhood friend Lorca Cohen (daughter of singer Leonard Cohen). He said, “What I can say is that I’m extremely happy. I love being a dad, and Viva is healthy and happy and we’re all around her. I know from my parents’ experience that combining children and a music career can be tricky.” Wainwright will marry longtime boyfriend Jorn Weisbrodt, a German theater producer, in August.

Contestant Colton Dixon told USA Today that singing a Lady Gaga song may have cost him votes and led to his surprising exit April 19. Dixon—a 20-year-old singer from Murfreesboro, Tenn.—chose Gaga’s “Bad Romance,” which may have soured his relationship with voters. Dixon said, “Some religious people hear Gaga, and they totally turn it off. I don’t know why I didn’t think of that, because that’s the big majority of my voters. I should have thought of that.”

Disney movie-studio boss Rich Ross is stepping down, a month after the company was dealt a huge blow by the box-office bomb John Carter, according to USA Today. When he headed Disney Channels Worldwide, Ross brough Hannah Montana and High School Musical to the masses. Disney booked a $200-million loss with John Carter, a sci-fi movie that stars Taylor Kitsch.