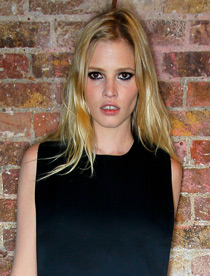 It’s a little known fact (outside the industry) that Michael Bay—he of Armageddon, Pearl Harbor etc—works with Victoria’s Secret.  You can thank the action-loving director for those dark commercials that try to squeeze suspense and adventure from lots of skin and a little bit of lace.  It was through VS that he met Rosie Huntington Whiteley, whom he cast in the sequel to Transformers.
It’s not that models haven’t always dabbled in film, but Whiteley was the first of this generation—those who weave in and out of Paris and J.Crew catalogs at equal speed and have their every action documented by Twitter and blogs.  Since then, Doutzen Kroes was signed to a Dutch film, and now Lara Stone’s expressing her interest in playing a Bond girl.
In all fairness to Stone—who’s the most high-fashion of the three—she says she’s never really thought about acting, but would consider playing “a Bond girl if they asked me. For sure—I would make a great evil Bond girl!”  Of the Frejas, Darias, Natashas and Abbey Lees of the world, who do you think will be next the next Hollywood defector?