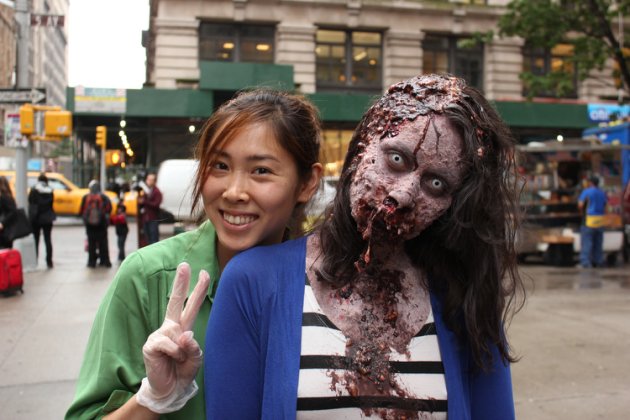 All you “Walking Dead” fans out there probably feel pretty confident you could handle a zombie apocalypse. But how would you really react if you witnessed actual in-the-rotting-flesh walkers hobbling through the streets of your town? You’d probably scream and run away, if this “Walking Dead” promo clip is any indication.

AMC teamed up with viral marketing agency Thinkmodo to unleash a horde of supremely gross zombies (expertly created by makeup artist Sue Lee) on the streets of Manhattan, dressing them up as paramedics and mailmen and filming bystanders’ reactions to the undead invasion. And the clip has been a huge success, racking up more than 2.5 million views in less than a week. Thinkmodo co-founder Michael Krivicka gives us the inside scoop on the shoot: “We shot this video over the course of eight days in various parts of Manhattan with 13 different zombie characters. The challenge was to keep the zombies hidden and have them pop up at the right moment to scare people and crowds.”

[Video: ‘The Walking Dead’ at Comic-Con: Michonne, The Governor, and More]

Makeup artist Sue Lee with one of her undead creations (Thinkmodo)Another challenge: keeping the zombies from going viral too early. “The moment a zombie was revealed, people from across the street started running towards the zombie to take photos and videos,” Krivicka reveals. “So we had to keep hiding them and have them reappear again on a frequent basis.” And he says the craziest reaction actually happened off-camera: “A woman and her child were walking past one of our zombies and the woman screamed out loud and started cursing at our zombie. It was hilarious. The zombie was actually ‘in transit’ to his location and already scared the crap out of this poor lady and her child. The child was actually amused.”

The clip isn’t just intended for pure shock value, though; it also serves as another salvo from AMC against satellite-TV provider Dish Network, which dropped the network last month. The clip ends with a walker dragging a Dish satellite behind him, with the tagline, “Zombies don’t belong here. Put them back on TV.” They’d better hurry: “The Walking Dead” returns with all-new episodes in two short months, and if Dish doesn’t bring back AMC before then, they may be facing an invasion of their own… and angry “Walking Dead” fans might be even scarier than zombies.