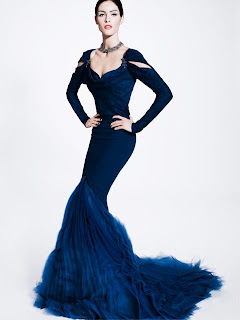 Zac Posen is clearly getting into the Christmas party/awards season spirit if his pre-fall 2012 collection is anything to go by. Never have we seen one singular collection laden with so many enviable gowns, and we are beaming from ear to ear because of it.

We know that Zac Posen is one of the go-to designers if a fairytale-inspired red carpet worthy dress is what you’re after, and this collection was no exception.
As we keep reminding you, awards season is almost upon us, which is why we are keeping our beady eyes open for potential wow-factor dresses – and we are willing to bet good money that at least one A-lister will don one of these gowns at an awards ceremony next year.
According to Styleite, Zac Posen was apparently inspired by “American couture, Charles James and Cristobal Balenciaga” for this collection – and we can totally see where he is coming from, can’t you?
Which Hollywood stars do you think would do the sexy, figure-hugging designs justice? Anne Hathaway immediately springs to mind for the dress above (modelled by the lovely Hilary Rhoda), but what do you think?