American Idol Results | And We Got Three 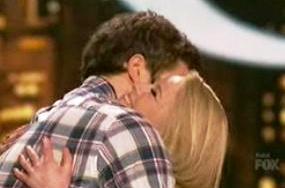 It may have taken 57 minutes of Ryan Seacrest agonizingly dragging out the proceedings, the judges babbling seemingly without a teleprompter, and J.Lo ickily flirting with her boy-toy backup dancer Casper Smart…but eventually on Thursday, Ryan did get around to announcing the “American Idol” result that everyone had been expecting not only all day, but really for weeks now: Hollie Cavanagh was, unsurprisingly, eliminated. Hollie had a pretty good run on “Idol,” but after being on the chopping block six times this season (not to mention being sent home during Hollywood Week when she tried out last year), her time was finally up.

Hollie goes home
For a few weeks, it actually looked like Hollie was gaining momentum and becoming this season’s Haley Reinhart. But after she “crashed and burned,” according to tough-talking mentor Jimmy Iovine, during Wednesday’s emotionally flatlined performance of Bonnie Raitt’s “I Can’t Make You Love Me,” she failed to make voters love her–at least not as much as they loved the standout, best-of-the-season performances by Joshua Ledet, Jessica Sanchez, and a surprisingly revitalized Phillip Phillips.

This was a respectable showing for this little fighter, but as Hollie watched her goodbye sizzle reel at the end of the episode, the sullen expression on her usually cherubic face made it clear that she was NOT too thrilled to only make it to fourth place. However, Joshua, her bestie on the show, actually appeared to be even more upset than she was, wiping away his tears as Hollie belted out her swan song, “The Climb.”
And then there were three: Joshua Ledet, Jessica Sanchez, and Phillip Phillips. Which two will make it to the finale in just two weeks? It’s obvious that the judges and producers are hoping for a Jessica/Joshua finale, but Phillip is the only contestant left who’s never been in the bottom three before–so statistically, he still seems like the one to beat. Next week, we’ll find out if P-Squared will make it to the final square-off.
Parker out.