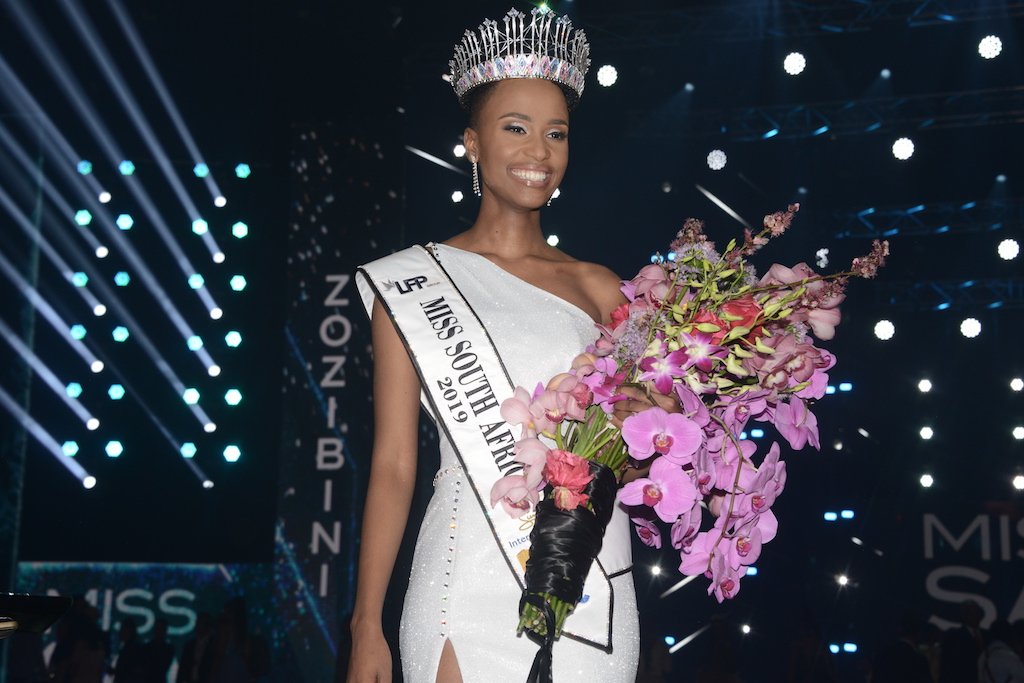 PRETORIA, SOUTH AFRICA - AUGUST 09: Miss SA 2019 zozibini Tunzi during the Miss South Africa 2019 beauty pageant grand finale at the Time Square Sun Arena on August 09, 2019 in Pretoria, South Africa. From its inception in 1943, the Miss South Africa pageant has attracted thousands of beautiful, empowered women from across the nation. This year, the pageant held on national Women's Day, boasts a new crown named 'uBuhle bethingo lenkosazana', a celebration of women, diversity and the beauty of the rainbow. (Photo by Gallo Images/Frennie Shivambu)

Zozibini Tunzi is the latest South African Beauty Queen as she has been crowned Miss South Africa 2019.

The Eastern Cape beauty beat 15 other stunning young women from across the country to take over the prestigious crown from last year’s winner, Tamaryn Green.

The 25-year-old beauty queen walked away with a mouth watering R3-million prize package, which includes a whooping R1-million cash prize, a new car and a fully-furnished apartment for the year of her reign.

The event took place at Time Square in Pretoria.

Zozibini Tunzi is a 25-year-old completing her BTech in PR from Cape Town. Her role models are her parents and Caster Semenya, whom she’d love to meet. Zozibini is a hard-core Marvel fan, was a Game of Thrones addict and enjoys eating out. Who is your favourite Marvel superhero? #ZoziForMissSA #DreamWalker #MissSA2019

Tunzi Talks About Her Life And Family

Zozibini Tunzi’s mother Philiswa was so overwhelmed by her daughter’s crowning as Miss SA at Sun Arena, in Pretoria, on Friday night that she almost fainted when her name was read out.

Security had to restrain Tunzi’s father Lungisa, overcome with joy, from getting on stage as she was being crowned.

Tunzi’s parents and her three siblings were seated not far from the stage.

The 25-year-old from Tsolo, in Eastern Cape reflected on the first 48 hours of her reign yesterday.

“My family is happier than I am at this point. It’s a big thing for our family, it’s not just me.

“They were the first people to see me when we opened the show. We had hoods on, so no one could see us. But I could hear them whispering and pointing at me,” she said.

Tunzi’s mother is a school principal at Bangweni JSS, in Bolotwa, a village in Eastern Cape. Her father works in Pretoria at the department of higher education and training.

It’s no surprise that one of Tunzi’s priorities include access to education, especially at early development level.

“Education is something that has been instilled in me ever since I was a child. I was privileged to have my parents take me to best schools and not in my village,” she explained.

“That is very sad. I feel like South Africa should have schools where everyone feels comfortable in the education being offered – whether it’s a village or otherwise,” she said.

Another big mission for her is to proudly represent SA with her short natural hair on a world stage at Miss Universe.

“Women are multifaceted and we are all beautiful in our own right. I’m happy to go introduce a different kind of beauty on a world stage.

“I feel like beauty in that space has been westernised. Maybe for the first time Miss Universe will be an African girl with kinky hair,” she said.

“It’s important to remember that it’s not just about hair, as women we have a right to look however we want to look.

“For me looking this way doesn’t take anything away from women who choose to wear weaves. We are really more than our hair.”

Tunzi was a Miss SA semi-finalist two years ago. She had planned to re-enter the pageant in 2020 until she discovered that at 25 it was the final year she qualified to enter.

She sent her application for the 2019 pageant on the final day on June 10.