(Reuters) – Lebanese fashion designer Walid Atallah did not make sales for the first four months of the global credit crisis, but business has resumed as clients continue to crave luxury brands, and cost is no object. 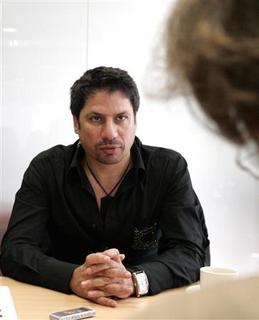 “In the beginning my clients used to complain to me about how much money their husbands have lost during the crisis … but now if ladies don’t wear beautiful dresses they aren’t ladies,” Atallah, said at the Reuters Global Luxury Summit in Dubai.
Atallah, who makes most of his profits from wedding dresses, said sales in June alone are up about 25 percent compared to June last year, as couples look to get married before the Islamic fasting month of Ramadan begins in August.
Atallah is established on the international fashion circuit holding shows in Paris, Italy and the Gulf Arab region. His work includes haute couture, jewelry and wedding dresses with some priced as much as $1.2 million.
He will be making his first appearance at Couture Fashion Week in New York this September as he looks to tap into new markets
Atallah, who designs clothes for royalty and celebrities, has no plans to sell his luxury clothes to the masses and lowering costs due to the financial downturn is not an option.
“They don’t want me to make lower prices … she doesn’t want another woman who has less money to wear it,” he said.
“Most of the ladies, if they see some star wearing the dress and have a nice body and a nice look, they want to be same … it would be walking advertising.”
Prices for dresses start at 70,000 dirhams ($19,060) and he sells on average 400 dresses a month, 150 of which are wedding dresses and the remainder party dresses.
Jeans and tops sell for a minimum 10,000 dirhams and his profit margin for most items is around 20 percent, he said.

The most expensive dress he sold was an emerald and diamond dress in 2004, which went for $1.25 million, he said, declining to say who the buyer was.

Jewelry DOWN
While his customers are willing to keep buying expensive dresses, spending on jewelry has dropped as the financial downturn hits their pockets.
“Now the jewelry market is down for me … ladies are asking for small jewelry sets and not big ones.”
“Before they were asking for 7 million dirhams, 6 million dirhams … now its 200,000 or 150,000 dirhams …,” he said, adding he will launch a new jewelry collection after his trip to New York.
Atallah, who has boutiques in the United Arab Emirates and Qatar, will also turn his efforts to persuading the likes of British luxury retailer Harvey Nichols to stock his designs in the future.
Around 70 percent of his client base come from the Gulf Arab region with many of the remaining 30 percent from Russia, he said.
While his focus is on luxury clothing for women, he does occasionally cater for men.
“I don’t have time, but I do make for special people – sheikhs and famous people, who need some unique pieces.”
For summit blog: summitnotebook.reuters.com/)
(Editing by Hans Peters)
($1=3.672 dirhams)
(Additional reporting by Daliah Merzaban, John Irish, Amena Bakr)