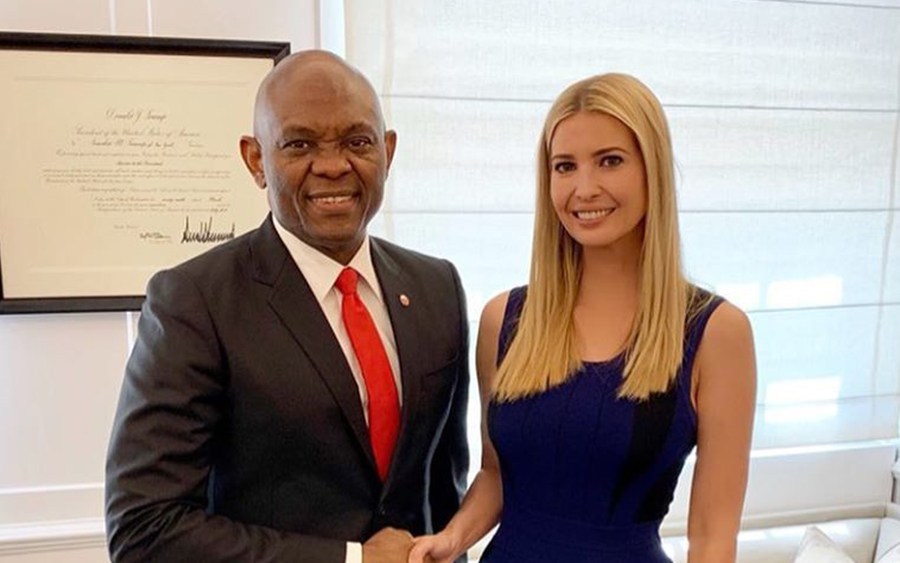 Yesterday, Nigerian entrepreneur, Tony Elumelu and the CEO of his Foundation, Ifeyinwa Ugochukwu visited the official home and workplace of the President of United States of America, The White House, to meet with the daughter of the President, Ivanka Trump.

According to a statement posted on the Foundation’s Instagram handle, the purpose of the visit was to discuss how the Tony Elumelu Foundation and The White House can synergise to deepen the impact of the Foundation across Africa.

Inclusive participation: The meeting was benched on how more women can participate in the Tony Elumelu Entrepreneurship Programme. According to the Foundation’s data, female participation has increased from 28% to 41% since 2015.

“We believe that working with @IvankaTrump’s initiatives- We-Fi and 2XAfrica, we can together support more women owned businesses in Africa”.

The Foundation believes that working with Ivanka Trump’s Women’s Initiative, We-Fi and 2XAfrica, will provide the right support to women-owned businesses in Africa.

Ivanka Trump Initiative: The daughter of the American President, Ivanka is championing a White House Initiative, to empower women around the developing world economically. This initiative will see the provision of $27 million in grants for projects in about 22 countries.

Participation for all: The Tony Elumelu Foundation, which was established in 2010, has supported more than 7000 entrepreneurs in Africa in the last 5 years and aims to support more soon.

The Founder, Tony Elumelu was recognized as one of “Africa’s 20 Most Powerful People” in 2012 by Forbes magazine.

Collaborating with Ivanka Trump’s Initiative is not the only step the Foundation is taking to bring more progress to African youths.

According to an earlier report by Nairametrics, the United Nations Development Programme (UNDP) is partnering with the Foundation to provide entrepreneurship support for youths in the Sahel region of Africa.

According to the UNDP, its mission is to support additional 100,000 entrepreneurs from the region, which includes Northern Nigeria, Niger, Chad, Cameroun, Mauritania, Mali, and Burkina Faso.