The Final Screening of the Nigeria’s Next Super Model 2012.

The awaited screening eventually rounded up at Best Western Hotel in Victoria Island, Lagos. All the contestants are awesomely gorgeous as they appeared elegant and graciously glide up and down the runway.

All the shortlisted contestants from the previous screening at Rays Inn were present alongside some new faces after being screened privately.
The event was opened with a series of “Talent Hunt” of the contestants flaunting what they are best at after which there was a breath-taking dance steps from the contestants while the audience are being “Wow-ed”.

Please check our Youtube Channel for the various videos captured at the event.

The event was graced by several Dignitaries, Brand CEOS, Sponsors, The Media, Guests, Friends and Well Wishers rallying their support for NNSM 2012. 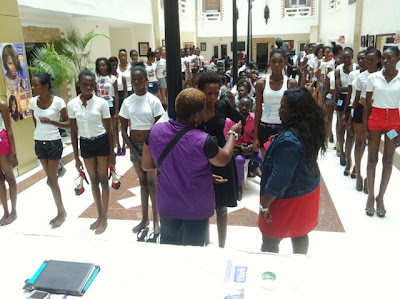 Before the calling out of the finalists, JOAN OKORODUDU addressed the guests, introducing some of the sponsors, while telling the brief history and phenomenal growth of NNSM.

Finally, Twenty-five (25) were short-listed from the fifty-two (52) shortlisted at the second screening that emerged from the one hundred and thirty-five (135) registrants

Two contestants from Canada and UK will be joining the final selection where they will be camped.

Amongst the brands, guests and sponsors present were: L’Oreal Paris (with their Dark and Lovely products), Prince Dany of Petit Prince, Dr. Vivian Oputa, Mon Ami, Meg Alabi Couture, Sally Inhego, Wranglers, Linda Ikeji and Wave Tek (which will be broadcasting NNSM 2012 live to the world) to name but a few.