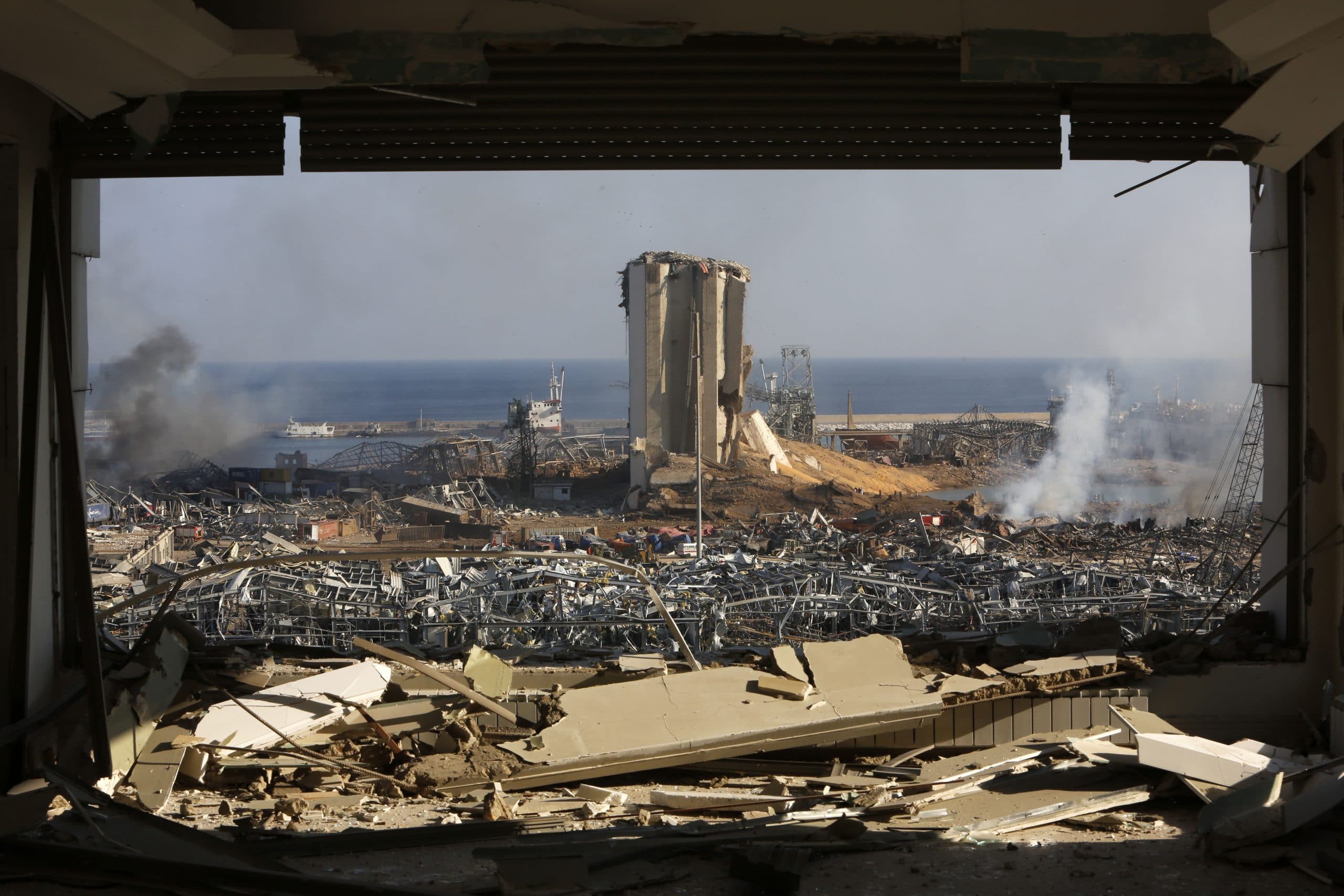 BEIRUT, LEBANON - AUGUST 05: Smoke rises above wrecked buildings at the citys port, devastated by an explosion a day earlier, on August 5, 2020 in Beirut, Lebanon. As of Wednesday morning, more than 100 people were confirmed dead, with thousands injured, when an explosion rocked the Lebanese capital. Officials said a waterfront warehouse storing explosive materials, reportedly 2,700 tons of ammonium nitrate, was the cause of the blast. (Photo by Marwan Tahtah/Getty Images)

Half of the city of Beirut have been affected by the explosion which happened on Tuesday.

A massive blast on 4 August has caused widespread damage in the port area of the city of Beirut in Lebanon, with over 130 people reported dead and about 4000 injured.

Here’s what we gathered about the incident…

Videos going viral on the internet show a white pall of smoke rising over the city. Seconds later, a red plume of smoke can be seen shooting into the sky, followed by a massive explosion.

“It is like an apocalypse,” eyewitness says of Beirut explosion aftermath

Homes as far as 10 kilometers away — or a little more than six miles — were damaged, according to witnesses.
90% of Beirut hotels damaged, state media says

The explosion dealt considerable damage to the Baabda Palace, the official residence of the Lebanese president, according to Lebanese state media. The blast shattered the windows of hallways, entrances and salons, Lebanese state news agency NNA reported on Tuesday. However, “no one was hurt,” NNA also reported.

“The incident could not have occurred at a worse time and has hit communities who were already suffering from the impact of the COVID-19 crisis and the economic deterioration. Beirut’s main port, now completely damaged, is vital for much of the food, grains, and fuel that Lebanon imports, and families will immediately feel the shortage in basic needs as a result of this tragedy,” said Jad Sakr, the organization’s director in Lebanon.

“Let me begin by sending America’s deepest sympathies to the people of Lebanon, where reports indicate that many, many people were killed, hundreds more were very badly wounded in a large explosion in Beirut,” Trump said at a press briefing Tuesday evening. ”Our prayers go out to all the victims and their families. The United States ready to assist Lebanon.”
“Looks like a terrible attack,” U.S. President Trump said, appearing to look up from notes on his podium.
Trump said the country has a “very good relationship with the people of Lebanon and we will be there to help.”

How this affects Lebanon

Prior to COVID-19, Lebanon was already in tough situation with anti-government protests, protests against proposed tax on Whatsapp calls, imposed lockdown due to COVID-19 even though the confirmed cases was only a little over 5,000 with 65 related deaths. All these caused Lebanon to default on its debt for the first time causing food prices to inflate. Currently the government believes 75% of Lebanese are in need of aid.

“We are very, very angry at this political class, and they all should leave,” said Jad Chaaban, an associate professor of economics at the American University of Beirut,”

However, Qatar, Iraq and Kuwait, Turkey, Russia are all sending aid to Lebanon
France promised to send two military planes and 15 tons of equipment to Lebanon, as the international effort to assist the country intensifies. European Union also pledges aid and support for Lebanon

“This accident here, this crisis, for 20 years they’re going to talk about it. The investigation, it’s never going to end. No conclusion, no results,” said one resident in downtown Beirut.”

However, the magnitude 3.3 equivalent isn’t, “directly comparable to an earthquake of similar size.”

That’s because surface type blasts, like the Beirut explosion, don’t produce as large a magnitude as an earthquake of similar energy would according to Don Blakeman, a geophysicist at the National Earthquake Information Center. Blakeman said most of the energy goes into the air and buildings.

“Not enough of the energy is transmitted into the rocks in the ground,” he said.

CNN’s correspondent Ben Wedeman said he had “never felt anything like it … [I’ve] been around the block and seen pretty large explosions … and this was bigger,” he told CNN’s Becky Anderson, adding that he only heard and felt one explosion.

“As far as I can tell there was just one absolutely massive explosion which caused all this damage in the Lebanese capital.”

There are many talks claiming that the explosion was an attack.
“This is not just ammonium nitrate,” former CIA operative says of explosion

What caused the explosion?

The blast was caused by 2750 tonnes of ammonium nitrate stored in a warehouse at the port. What set it off isn’t yet clear, but it was almost certainly a fire nearby. There are reports that a container of fireworks was burning. “100 per cent of explosions of ammonium nitrate in storage are due to uncontrolled fires,” says Vyto Babrauskas, a New York-based consultant who has written several papers on ammonium nitrate accidents.

What is ammonium nitrate?

It’s a white, salt-like solid mainly used as a fertiliser. It isn’t flammable in its pure form, but when heated can decompose in numerous different ways, releasing gases and more heat. If enough heat is released, this reaction can spread rapidly, producing a large amount of gas all at once – an explosion. Ammonium nitrate is much more explosive when mixed with carbon compounds such as fuel oil or even coal dust, which may have been a contributing factor.

Has this kind of thing happened before?

There have been numerous explosions around the world due to ammonium nitrate. The worst was in 1947, when more than 500 people died in Texas City during the unloading of a ship carrying 2300 tonnes of ammonium nitrate. The most recent was in West, Texas, in 2013, when 15 people died after an explosion in a fertiliser warehouse. Video footage of that explosion resembles that from Beirut, says Babrauskas. “Beirut is the same thing, just done bigger.”

What was that strange white cloud that appeared briefly during the main explosion?

That was the shockwave from the blast making water in the air condense. A shockwave is a fast-moving area of high pressure. Immediately behind it there is a sudden drop in pressure and thus temperature, which causes condensation. The same effect causes the vapour cone around aircraft flying near or above the speed of sound.

And the red smoke visible before and after the shockwave was nitrogen dioxide, one of the chemicals that can be produced when ammonium nitrate decomposes. “If you see red fumes, run very fast,” says Babrauskas. We breathe in nitrogen dioxide all the time because it is an air pollutant produced by traffic, but its colour isn’t obvious because it is present only in trace amounts.

As Beirut’s 4 million residents wake to the full horror and scale of the damage to their city, lives, and livelihoods, questions will be asked about why such large quantities of the dangerous chemical were allowed to be stored in the middle of the city without adequate safety measures, and who is responsible.

Hairdresser Serge Mahdessian was working roughly 8,500 miles away from his wife, who was asleep in Melbourne, Australia when the explosion destroyed his salon in the Ashrafieh district of Beirut.
“It was so chaotic, it was like something out of a dream,” Mahdessian told CNN over the phone. “People running, holding their arms, their legs — there was so much blood,” he said. “I could have died today, instead I was only hurt a little on my hands because I was quick to run inside.”

Prime Minister Diab said in the statement it was “unacceptable” that so much explosive material was stored in a warehouse “without taking preventive measures while endangering the safety of citizens.”
“I will not rest until we find those responsible for what happened, hold them accountable, and impose maximum punishment,” he said.

The head of Lebanon’s Customs Authority Badri Daher said he repeatedly warned the country’s judiciary about dangerous substances stored at Beirut’s port. “Daher revealed that he asked to re-export these materials, but this matter did not happen,” LBC reported.