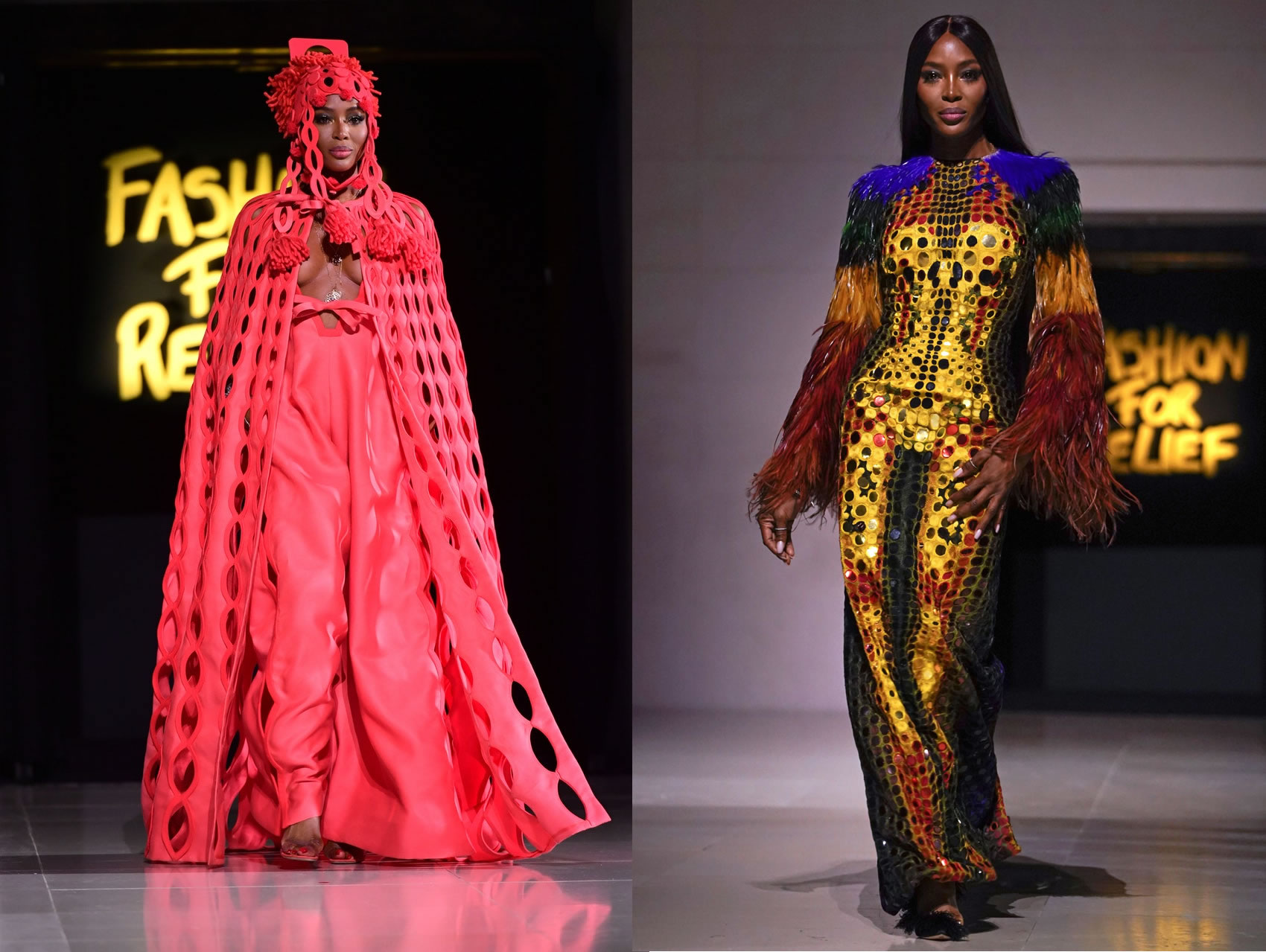 Did you know that Naomi Campbell returned to London Fashion Week on Saturday with her celebrated Fashion For Relief show? Oh yes, and she enlisted a few of her famous friends – Erin O’Connor, Stella Maxwell and some others – to walk the runway in clothes lent by Dior, Gucci, Givenchy, Alexander McQueen, and Marc Jacobs.

The models – including Campbell, who wore a billowing red number – were styled by students from the London School of Styling, and the show was followed by a celebrity-studded auction to raise money for the Mayor’s Fund for London and Unicef, with proceeds going towards helping disadvantaged people in the capital.

“Because Naomi was bringing the show back to England, it was all about bringing back her British iconic [look],” said make-up artist Charlotte Tilbury, backstage, ahead of the show. “Naomi’s an old friend, so I said I’d love to be there to support.”

While the fashion was big on colour and bold on statement silhouettes, in terms of beauty, “we wanted the skin to look really fresh and dewy. We’re using my Airbrush Flawless Finish Foundation but we’re thinning it down with my Magic Cream. You can ‘stretch’ the foundation to make it really dewy. [Naomi] wanted a little bit of a grunge look to it, a rock ‘n’ roll British edge.”

She did three looks for the models: A feline eye (“Which I’m massively known for, that I did with Kate Moss about a trillion years ago!”), a feline eye with a conceptual line (“Like a teardrop”) on the male models, using a Rock n Kohl pen, and on the darker skin tones, Tilbury used her new Instant Eye Palette – which launched on Friday and sold out almost instantaneously.

“We used the black eye shadow here that has a slight midnight blue through it. It goes on like velvet. We’ve got that mixed in with my Sophisticate palette to make a grunge smoky eye.”

The Naomi Campbell hosted event was the latest “Fashion for Relief” fundraiser organized by the well-known model, whose efforts are supported by a wide array of friends and designers. The first charity show was in 2005 in support of victims of Hurricane Katrina in New Orleans.

At the event, the British Museum’s steps and foyer became a red carpet staging area for fashionable elite who passed the time drinking chilled champagne and margaritas while last minute checks were made on the models’ makeup and outfits.

Campbell said this year’s benefit was to raise funds to protect vulnerable children throughout the world and help provide education and skills development. The black-tie event drew a huge and enthusiastic crowd, including many who stayed for a private dinner after the runway performance.

Actor Pierce Brosnan and actress Naomie Harris were among the star contingent, and the show was supported by a wide array of global fashion houses including Gucci, McQueen, Marc Jacobs and Vivienne Westwood.

As an eclectic, gender-bending and fun night got underway, no single theme emerged. But the overall impact was impressive.

Some of the outfits were clearly meant to be over the top, including mens’ looks that seemed to bare all: Many outfits did not cover the chest (putting a premium on gym work), and most of the tops were sheer. Double-breasted suits were meant to be worn without shirts and costumes paired white vinyl shorts with clear tops.

Overall it was punky, with plenty of attitude and edge.

An early start couldn’t deter Alexa Chung’s legions of loyal fans, who flocked to a Saturday morning show which included outfits that offered variations on her classic feminine themes.

Chung greeted fans with a video message featuring a montage of what she described as “AC World.” She described the new styles as “clothes to feel empowered in” with a theme of “female solidarity” and said they were designed to “get over heartbreak.”

The collection featured a number of longer coats, including belted variations. Some were worn over slip dresses or beautifully constructed longer dresses. The colours were muted, with many variations of green and gray, and Chung paid homage to the American west with a denim dress that seemed to conjure up open skies and endless vistas.

There was a well-tailored double-breasted suit and some 60s-style jumpsuits, but no sign of Dynasty-style shoulder pads or power-dressing. Chung doesn’t do flash, but she couldn’t resist a few faux-snakeskin pieces.

Models wore mostly light makeup and flowing hairstyles to allow for a style that looked simple, easy and elegant rather than fussy or overdone.