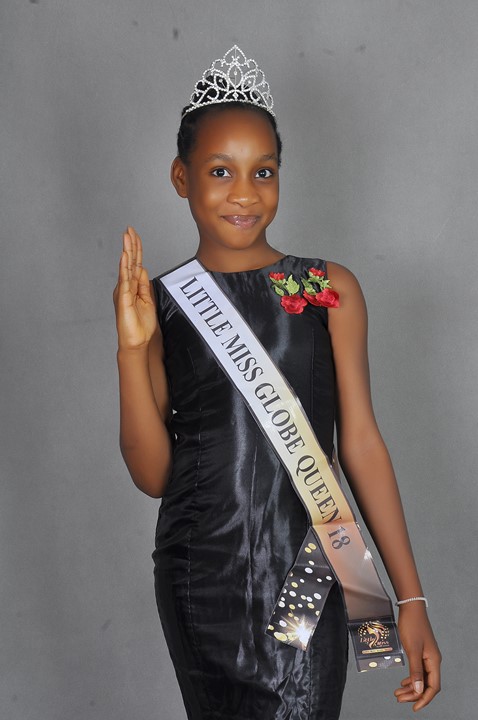 Esther inoluwa lawal Little Miss Globe Queen 2018 was born into the family of Mr. and Mrs. Noah lawal on the 16 of September 2007 in Lagos, Nigeria. Her parents are Christians and she has two younger brothers by the name Emmanuel and Elijah.   Esther lawal started her education in Lagos at the age of 2years and moved with her family to Abuja in 2012 when she was in primary 2.

She continued her schooling at Joseph jorin international school, kubwa, Abuja where she bagged the overall best student in all her primary classes till she graduated in primary six. During the schools graduation ceremony at the end of the summer term in 2017, Esther was honored with the best graduating student in addition to her being the first position in the whole of primary six along with her usual overall best student price .She performed excellently well in her Turkish mathematics exams and in her common entrance examination and got admission into Federal Government Girls College Bwari, Abuja to start he junior secondary school[JSS].However due to her parents decision ,she enrolled in British Elite Standard Imperial School Kubwa, Abuja where she is presently undergoing her high school education.

Her hobbies are singing, dancing, journalism, writing and reading novels/story books. In 2016 she went for the Little Miss Nigeria competition but she did not win. She was determined to become a Beauty Queen so she tried again in 2017 and she won. This was the beginning of her dream to be a pageant queen. She met the commissioner of women affairs in kogi state and also met the Governor of Kogi state. In 2018 she handed over her crown and went for another beauty pageant in Abuja. the pageant is called Little Miss Globe Queen. She went for their camp and she came out with the crown. Currently she is the Little Miss Globe Queen and she sees herself in the next eleven years as the next Miss World.