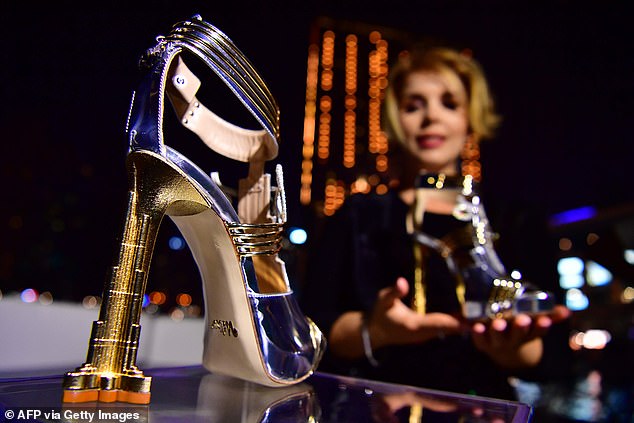 Meet Moon Star Shoes: The Most Expensive Shoes in the World

24 Karat Gold, Meteorite Rock and 30 Carat of Diamonds are the main items used in making the World most expensive shoes called the Moon Star Shoes.

The Moon Star shoes was unveiled in Dubai last weekend, estimated to cost a super-wealthy fashionista a whooping £15.7million, that is $19.9million, or Dh73 million!

This beauty were the centrepiece of the Made in Italy, Designed in Emirates Fashion Week and launched on board a yacht in Dubai Marina.

The heel is a model of Dubai’s Burj Khalifa skyscraper, which stands at 163 storeys and more than 2,700 feet tall, while the meteorite was recovered in Argentina in 1576. The Campo del Cielo iron meteorite fell 4,200 – 4,700 years ago, and was discovered in the 16th century by members of the Spanish military.

The Italian designer Antonio Vietri was known to be creating out-of-the-ordinary offerings for the super-rich. In 2017, he showcased a pair of 24-carat gold stilettos worth a comparatively measly £26,000.
The UAE-based shoemaker said: ‘The word ‘impossible’ does not exist in my vocabulary.’ Known as the inventor of the first 24-carat gold shoes in the world, Vietri described himself as an entrepreneurial spirit with an artisan heart, who founded his company thanks to timeless techniques handed down from generation to generation.

Been such a blast throughtout the process of creating the world's most expensive shoe with the fabulous @shoebakery not only does my client love the shoe but I get the chance to help change another creative's life Chris Campbell from shoe bakery. An artist with bags of talent and creativity. Creating a world's most expensive will raise your profile and open doors, many forget that I'm just a girl from a council estate, a girl with sheer determination and decades of blood sweat and tears got to where I am today. My future is in helping the next generation of creative's hence why I set up future of fashion academy @futureoffashion_academy now branching out internationally and not just working with kids but also emerging talent. Our future artists and designers are every day people like me and you we come from all back grounds, we are all nationalities and genders. #nextgenerationofcreatives #futureoffashion_academy #worldsmostexpensive #inspire #powerfulcreatives #artists #fashiondesigners #emergingtalent