Marc Jacobs on Dior rumors: I’ve still too much to do at Vuitton 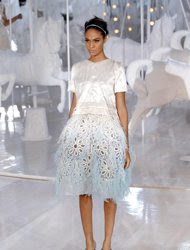 Marc Jacobs has firmly closed the lid on the past rumors of a move to Christian Dior, explaining he still has “so much more to do” at Louis Vuitton.
Speaking to British newspaper The Telegraph January 9, Jacobs readdressed past reports he would be replacing former head designer John Galliano at Dior, after the latter was dismissed in March 2011 following his arrest at a Paris bar for racist and anti-Semitic behavior.
While Jacobs was flattered to be considered by LVMH chairman Bernard Arnault for the position, the designer reaffirmed his status at Louis Vuitton, arguing he still has plenty of ambitions for the fashion house he has helmed since 1997.
“It’s a great honor to be considered, and Mr Arnault is a super intelligent man and a very smart man and it was certainly a very great honor for him to know that I was capable — and not only capable but that I am someone that he would have wanted for the job.
“But I am very happy to be here. There is so much more left to do and building Louis Vuitton into a fashion company is something nobody else can say they really started,” explained the creator.
“I am really happy and I do love working here. I just think there is so much more to do.”
Just some of the expansion to come from Louis Vuitton includes the label’s first standalone fine jewelry store, which will be unveiled in Paris’s Place Vendome this month. It was also announced January 4 that the brand is planning its first fragrance since the 1930s, with master perfumer Jacques Cavallier-Belletrud heading up the scent development.
Meanwhile, the most recent name associated with the Christian Dior head designer job is Belgian creator Raf Simons, with an article published in WWD last month claiming the fashion house was finalizing his contract. Other fashion heavyweights linked to the position in the past include Phoebe Philo, Riccardo Tisci and Alber Elbaz.