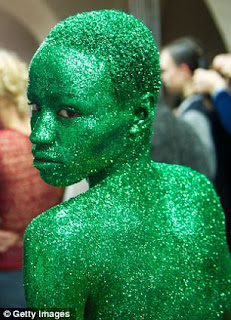 .Statement: Deep red lipstick and vivid green eyebrows made for a dramatic look  for one model, while another is covered in glitter to represent the protective shell of an insect 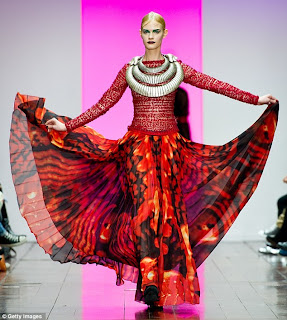 .Impressive debut: The design duo, who won last year’s Fashion Fringe prize, is showing on schedule for the first time this year. The lavish collection was inspired, they say, by Russian peasants, tzars – and insects 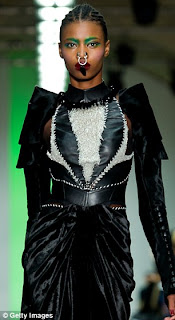 Design duo FYODOR GOLAN opened fashion week with a bang as they showed an outlandish collection modelled by models with green glittery skin, tribal-style piercings and hair slicked into intricate designs.
The pair, Israeli-born Golan Frydman and Latvian Fyodor Podgorny, made waves with their  innovative catwalk show at London Fashion Week, which they said was inspired by ‘Russian peasants, tzars and insects’.
The young duo are firmly on their way up, after last year having been awarded the Fashion Fringe prize, judged by Claudia Schiffer and Roland Mouret among others.
At the time, their fledgling label had been going just one year. Now, with two years’ experience under their belts, the collection – their first shown on-schedule at the event – looks yet more accomplished.
Golan studied at the Instituto Marangoni in London while Fyodor studied at the Royal Academy of Fine Arts in Antwerp, before moving to London where they both met.
Between them, the two, who launched their label in 2010, have a wealth of experience to pour into their own brand, having worked with Richard Nicoll, Alexander McQueen, Raf Simons and Issey Miyake. 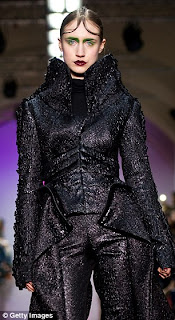 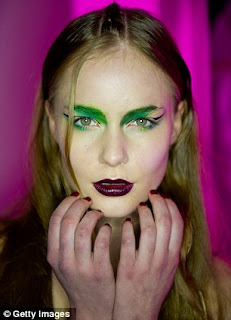