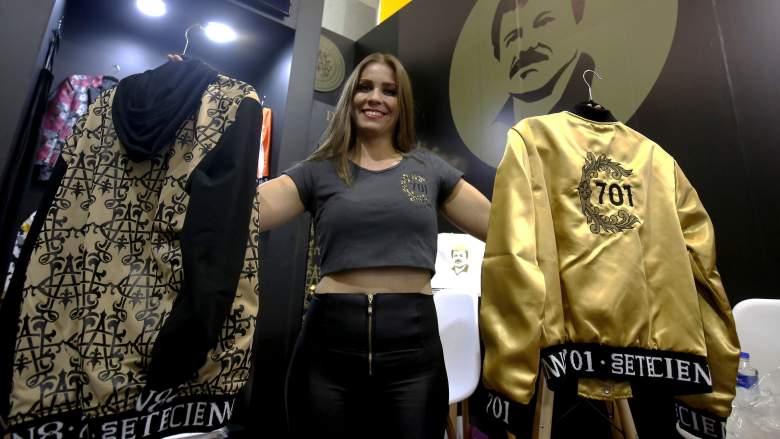 Alejandrina Gisselle Guzmán Salazar, the daughter of Joaquin “El Chapo” Guzmán and his first wife, Maria Alejandrina Salazar Hernandez, has started her own exclusive fashion line inspired by her convicted drug kingpin father. Last Wednesday, Guzmán was sentenced to life in prison for running the bloodthirsty cartel that moved tons of drugs into the United States. He was also convicted of unlawful use of firearms, including machine guns. The exclusive “El Chapo 701” line dropped this week at the Intermoda fashion show in Guadalajara, featuring T-shirts, sweatshirts and flashy blazers, all inspired by her drug lord father. What else is there to know about her and her brand? Who is Alejandrina Gisselle Guzmán Salazar?

1. The Chapowear premiered at IM Intermoda, a fashion expo held in Guadalajara.

The show runs from Tuesday through Friday and brings “together designers, producers, distributors, and national and international buyers to exhibit and acquire the most outstanding trends of the season.” The line includes 20 pieces that range from $35 for shirts to about $100 for belts and jackets. The fashion brand was relegated to a “cramped four-square-meter corner at the Intermoda fashion show,” but it still managed to be one of the event’s biggest attractions. Alejandrina has 9,000 followers—a well-established social media presence for her fashion brand.

In March, Coronel announced that Guzmán had signed over the rights to his name. I guess his self-made $1.0 billion fortune isn’t all that useful in prison. The number 701 refers to El Chapo’s place on the Forbes list of the richest people in the world in 2009.

3. The belts are made by prisoners at the Puente Grande prison in Jalisco, the maximum-security lockup Guzmán escaped from in a laundry cart in 2001.

A New York Post article reports that one white hoodie they sell is emblazoned with “701” and “Lord of the Mountain,” while a mosaic of the longtime Sinaloa cartel leader wearing a baseball cap is featured on a black-and-white striped T-shirt. They also sell t-shirts, jeans, jackets, dress shirts, outerwear, hats, sombreros, shoes, swimsuits, liquor, and a wide line of accessories.

Guzmán has actually escaped prison in Mexico twice—once by hiding in a laundry cart and the second time by slipping through a mile-long tunnel his cohorts dug leading to his prison cell. Though he’ll return to the MCC for now, Guzman will soon be assigned to a new home by the Bureau of Prisons, likely at ADX Florence, the U.S.’s only supermax lockup in Colorado, where he’ll remain for the rest of his life.

4. She’s getting some criticism for using El Chapo as her inspiration.

“There are people who give us a lot of support, who like it, who buy things and come from other places to distribute our products,” sales representative Adriana Ituarte said. “But there are some people who criticize us, who say we are promoting a drug trafficker.” Despite this backlash, she says the brand has been generally well-received at the show.

5. Some proceeds will go towards supporting addictions treatment.

Talk about irony. According to Mexico News Daily, Ituarte told the newspaper Publímetro that some of the proceeds from online sales will go towards supporting an addictions treatment association founded by Alejandrina Guzmán that supports inmate rehabilitation and addictions treatment.

6. Alejandria refers to her dad as the “CEO of Sinaloa” and “Lord of the Mountains.”

In stark contrast to the descriptors chosen by federal prosecutors for El Chapo— “a ruthless and bloodthirsty leader of the Sinaloa Cartel, [whose] the horrific nature and circumstances of the defendant’s offense, his history and characteristics and the fact that the defendant committed some of the most serious crimes under federal law make a life sentence warranted”—Alejandria sees him differently, as “a friend of everyone,” a “willing leader” and “a humble orange vendor with many goals and great ambition,” as her brand’s website reads. His face is featured all over the site, as well as in the showroom display and on related social media outlets.