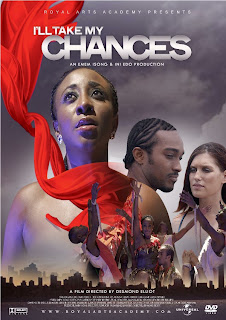 The movie which stars talented actress, Ini Edo and hot new heartthrob Bryan Okwara and lovely dance sensation, Ashleigh Clark is being premiered in Uyo for the world.  The movie which was shot in early February has been in post production is finally ready to be revealed to the world. The movie features a stellar cast that includes a retinue of dancers, as well as respected actor Jide Kosoko, Lilian Ikpe, Biola Williams and the late Sam Efe Loco in a spectacular tale that involves drama, suspense, dance and love. The movie was produced by Emem Isong & Ini Edo and directed by Desmond Elliot.
According to Emem Isong, co-producer of the film, ‘We decided to premiere the movie in Uyo as a show of solidarity with the good people of Akwa Ibom because most of the film was shot there and depicts culture from that area. We also received much support while shooting so it will be great for them to see it first. September also happens to be the month Akwa Ibom state was created so I think its very apt for it to be shown during that period.   It is poignant for me to release this film because this is possibly one of the last  films acted by Uncle Sam and he was outstanding in  his performance! The film is infact dedicated to him’.
‘I’ll Take My Chances’ screens in cinemas nationwide in December this year.