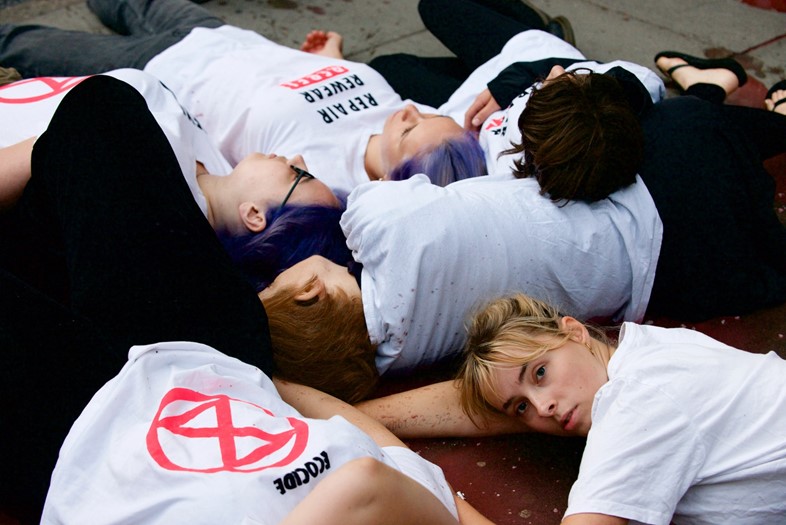 – Extinction Rebellion stage a die-in at London Fashion Week
– The climate activist group covered themselves in fake blood, marking the start of five days of action against the fashion industry

Extinction Rebellion (XR) declared last month that it was going to “shut down” London Fashion Week in an attempt to raise awareness about the environmental damage caused by the industry. Just outside of the London Fashion Week official venue on the Strand, the climate activist group covered themselves in fake blood and staging a die.

This marked the first of five days of action, protesters arrived just before the doors opened, glueing themselves to entrance of 180 The Strand and flooding it with red liquid – creating a “bleeding red carpet” – before lying in it on the ground outside. According to a press release, the action aimed to “highlight the blood on the hands of the industry”.

“The fashion industry has a huge part to play in the current climate disaster,” campaign leader Sara Arnold said in an interview. “We’re singling out LFW because they’re thought leaders, they’re cultural leaders, and for that they need to step up and alert people to this emergency.”

“For us, this is the last fashion week,” she continued. “We think if fashion week is still happening next season, we’re still at the point where we haven’t got to grips with this crisis quick enough.” In honour of it being “the last” LFW, Extinction Rebellion has planned a ‘funeral’ to take place on the final day (September 17) of the biannual event, which will “pay respect to its legacy and put it to rest forevermore”.

This morning’s protest comes just hours after climate change activists were arrested at Heathrow, following a failed attempt to fly drones within the airport’s exclusion zone. XR’s co-founder Roger Hallam was also arrested ahead of today’s planned action by Heathrow Pause – a splinter group of XR.

The past year has seen Extinction Rebellion cause mass disruption across the world, shutting down cities, stripping off in the House of Commons, and staging die-ins. In May, UK parliament became the first in the world to officially declare a climate emergency, though most British people still think the government isn’t doing enough to tackle the crisis.