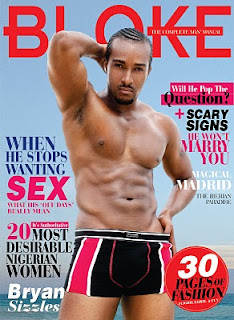 On the 23 RD of September 2011, it’s raining men… A bloke is generally perceived, as a ‘man’s man’; suave, stylish, good looking, confident and successful. He is sensitive as he is strong and he has the ability to make women hang on his every word. While some women fall over themselves to get his attention others are repulsed by this perfect larger than life image. It is from this already controversial standpoint that BLOKE builds its platform; a synergy of gender and relationship issues from a man’s mind. BLOKE MAGAZINE simply is ‘the Complete Man manual’; an intense and totally cosmopolitan magazine with a strong bias for relationship, sex, gender issues and of course, fashion; BLOKE provides a complete lifestyle directory dripping with rich masculine tenor and served with an unmistakeable feminine appeal. Drawn from the perspective of the quintessential man, BLOKE brings to the reader a thoroughly entertaining, yet highly enlightening package, laced with witty humour and light-hearted sexual banter. The single, married, student and professional woman between the ages of 21 – 45, will find a valuable companion in BLOKE.

IT’S EDGE It’s a new and fresh perspective to all the millions of questions women want to ask the men in their lives. Many magazines have generally attempted to bridge the gap between men and women as it concerns intimate relations. International blockbusters such as GQ©, Cosmopolitan©, FHM© etc have all been successful in addressing a vast number of gender issues. What none of these publications have been able to do is not just act as umpire in the age long ‘battle of the sexes’, but authoritatively create a pathway through the maze of complexities and uncertainties that have become the hallmark of modern relationships. 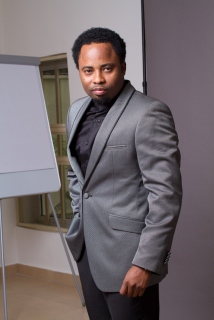 IT’S APPEAL While retaining a flavour that the male folk will embrace as its very own, being that BLOKE is birthed by the male psyche, its designed and packaged to ultimately appeal to the feminine market. Ours is an iconic product brandishing an unmistakable sexual tenor. Building its adroit perspectives from scientific research- medical, psychological and socio-cultural, yet keeping the language simple and engaging, thereby making for a very relaxing read.
The BLOKE personality is witty and smart; borrowing copiously from everyday pun and intelligent humour. BLOKE is also committed to consistently delivering one of the most attractive magazines on the stand, one that readers would be proud of. Like we always say – finally, a BLOKE everywoman can call their own. Editor: Omena Daniels BLOKE is published bi-monthly by AVENUE3 PRESS & PUBLISHING.